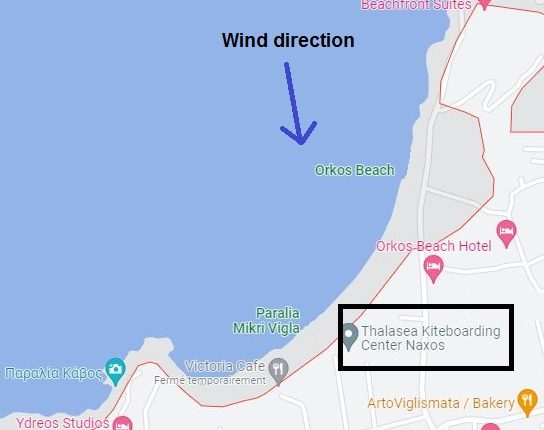 FIND US RIGHT ON THE BEACH OF THE MIKRI VIGLA KITE SPOT!

Thalasea Sports Naxos is located directly on the beach of the beautiful Parthena Bay in Mikri Vigla. In the rare occasion of no wind you can appreciate the crystal clear, turquoise waters of the long, sandy beach, enjoy a nice swim or go for a SUP or canoe trip to the nearby church island, which the beach is named after. You might even spot one or two of the local turtles, who seem to love this place at least as much as we do!

As soon as the Meltemi wind switches on, this part of Mikri Vigla turns into Kitesurfers’ paradise from one moment to another!

At our fantastic spot we are lucky to have some of the strongest winds in the Cyclades, created by a venturi effect that is formed by the squeeze between Naxos and the neighboring island of Paros. Come check out this magical place that every watersports enthusiast should visit!

The Meltemi is a strong northerly wind which generally hits our kite spot on Parthena Beach from a side-onshore direction – ideal for practicing kitesurfing in safe conditions!

Naxos is a natural playground for kiteboarders and windsurfers thanks to its wide, shallow bay and the Meltemi, a seasonal climatic system that creates great wind throughout the summer (June till September), but often also in May and October. This strong and stable wind is great for kiteboarders and windsurfers! It’s reliable too, with over 25 windy days a month during the summer.

The wind usually starts in the morning around 10 am, strengthening during the afternoon to 5-6 Beaufort, before dying out at sunset. However it is not uncommon for the Meltemi to continue blowing day and night for a week or more, allowing you to sneak in an early morning session or to ride all the way into the sunset and beyond! Small kite days!

The Meltemi is a northerly wind which generally hits our kite spot on Parthena Beach from a side-onshore direction – ideal for learning kitesurfing in safe conditions!

Things to see during your stay in Naxos

Naxos combines golden sands with the mountain beauty. Large enough to be explored, Naxos promises you unforgettable holidays. Due to its size and fertility, Naxos, is one of the most self-sufficient islands of Cyclades, with its own production of agricultural and dairy products. The famous Naxian cheese, potatoes and citrus are just a small example of them. An ideal island for relaxed vacations, Naxos is combining the characteristic colours of Cyclades islands with the perfect climate and the beautiful natural elements. On this island you can meet the tallest mountain of the Cyclades islands but you will also come across many welcoming fertile valleys. One thing that will impress you and that will surely remain in your memories is the open and welcoming spirits of the locals, their hospitality and their peaceful temperament. You will feel welcomed anywhere you go and for a few days you will be a part of a particular community of warm traditional people that constitute the greatest beauties in Naxos.

Naxos is located in the heart of the Aegean Sea and this is the greenest island of Cyclades. Although it is among the most popular Greek islands, Naxos has managed to keep intact its traditional character.

Location: On the north western side of the island. Also called Chora, Naxos Town is the capital and main harbour of the island. With a lovely waterfront and elegant Venetian architecture, it considered as one of the most beautiful Cycladic villages. Kastro is the most picturesque quarter in Naxos Town. It is actually the old castle of the village, which is now inhabited. Around this castle, the modern part of the town has been constructed. Portara is the trademark of Naxos. This is the first sight of the island that you get as the ferry approaches the port. It is the unfinished gate of a big temple dedicated to Apollo.

Location: 26 km east of Chora. Apiranthos is a beautiful, mountainous village in the centre of Naxos. Surrounded by lush greenery and keeping its elegant architectural style, Apiranthos is still untouched by tourism.

Location: 16 km south east of Chora. Halki is a lovely, traditional village in the centre of Naxos. It used to be the old capital of the island and has maintained its Venetian style.

Location: 30 km north east of Chora. Koronos is a traditional village built amphitheatrically on the slopes of a hill. It has houses of exceptional architecture, a picturesque square, paved streets and many arches that create a romantic atmosphere.

Location: 36 km north west of Chora. This is a charming fishing village with a couple of great fish taverns and a sandy beach. An ancient statue of Kouros is found close to Apollonas.

The famous Plaka Beach is a long, sprawling, strip of white sand with sand dunes behind the beach. Here you can enjoy the lovely water, a view of Paros and some space. Mikri Vigla is the most famous windsurfing spots in Naxos. The wind is perfect for windsurfing and kitesurfing. There are many coves both sides of Aliko beach and the sea is crystal clear. The unique cedar forest with the sand dunes all over the area create a really exotic environment.

The giant statue of a young man (Kouros) can be seen outside the village of Melanes. It lays on the site where it was excavated.

The Kouros of Apollonas dates from the 8th century BC and it lays on the site it was discovered. Archaeologists believe that it depicted a young man or Dionyssus, the god of wine.

Recently restored, this ancient temple is dedicated to Demeter, the goddess of grain. It dates back to the 6th century B.C. and it was discovered in 1949. A small church to Saint John stands next to the temple.

The Archaeological Museum is situated in the quarter of Kastro, Naxos Town. It is housed in a superb 17th century Venetian mansion, which used to be the Jesuit School of Commerce before. This really interesting museum exposes a collection of objects and art works dating from the late Neolithic period until the early Christian times.